Hanoi is hazy in the fog

Turtle Tower: The tower built in 1886 is located in the middle of Hoan Kiem Lake, in the center of Hanoi. During the French colonial period, at the top of the tower there was also a bronze version of the Statue of Liberty, commonly known as the statue of the Lady, and was demolished in 1896. Later, the villagers of Ngu Xa melted down the statue. to get bronze to cast Buddha statues. Hoan Kiem Lake also has many other names such as Luc Thuy, Ta Vong. 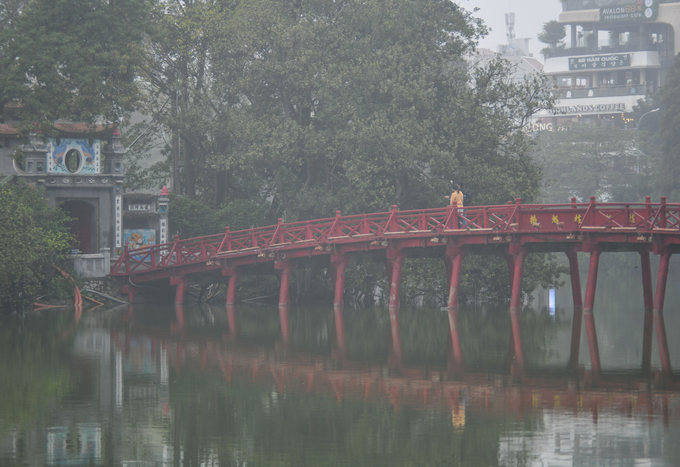 The Huc Bridge: In 1865, during the reign of Tu Duc, Nguyen Van Sieu built a bridge connecting the shore with Ngoc Son temple and named it The Huc, meaning “a drop of light rests” or “Condensation of aura”. The bridge consists of 15 spans, 32 legs of round wooden columns arranged in 16 pairs, the bridge deck is paved, the walls are painted dark red, the word The Huc is gilded. The bridge leads visitors to Ngoc Son Temple, located on the Pearl Island of Hoan Kiem Lake. Inside the temple, in addition to the worshiping statues, a specimen of the Sword Lake turtle is displayed. Ngoc Son Temple welcomes visitors from 7:00 a.m. to 6:00 p.m. on weekdays, the admission price for adults is 30,000 VND per person, 15,000 VND for children. 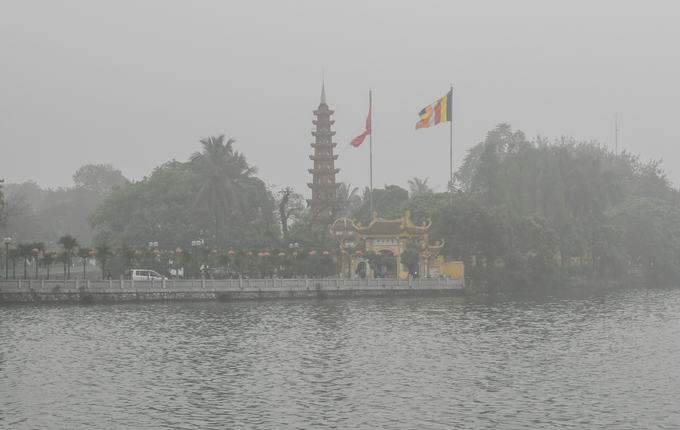 Tran Quoc Pagoda: Over a history of nearly 1,500 years, Tran Quoc is the oldest temple in Hanoi, also one of the oldest spiritual works in Vietnam, located near the end of Thanh Nien Street. The architecture of the pagoda has a harmonious combination of majesty and ancient beauty on the quiet background of a large lake. Once the Buddhist center of Thang Long citadel in the Ly and Tran dynasties, today, Tran Quoc Pagoda is not only a place to visit and pray for Buddhists, but also an ideal sightseeing spot for tourists. At the beginning of the year, the beginning of the month and the full moon days of the lunar calendar, Tran Quoc Pagoda is the most crowded. 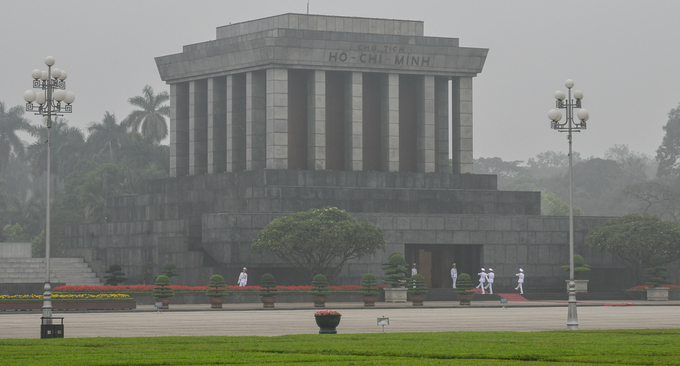 Ho Chi Minh Mausoleum: This is the place where President Ho Chi Minh rested after his death, located in front of Ba Dinh square. Every day, there are thousands of visitors queuing to enter the Mausoleum and the number of people is even larger on the occasion of National Day September 2. The mausoleum is open from 7:30 a.m. to 10:30 a.m. every day except Monday and Friday. In winter and on weekends, the above time may change. At 6 a.m. and 9 p.m. daily at Ba Dinh square, the flag raising and lowering ceremony takes place. 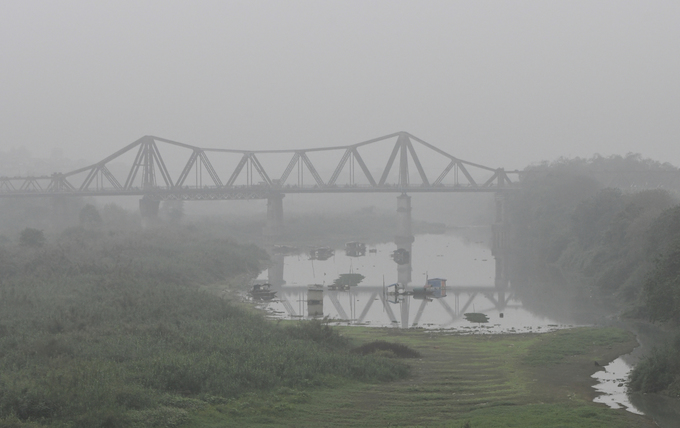 Long Bien Bridge: This is the first steel bridge across the Red River, built by the French, named Doumer Bridge, after the Governor General of Indochina Paul Doumer. Currently, on the bridgehead, there is still a metal plate engraved with the words 1899 – 1902 – Daydé & Pillé – Paris. This is the only bridge in Hanoi that goes in the left direction. Long Bien Bridge is also a symbol of Hanoi city next to the image of Khue Van Cac, Turtle tower… Kain Schneider, a German tourist, shared: “Everything appearing in the fog is very different from the photos on the internet. about Vietnam that I saw before coming here, very beautiful and memorable. I have been here for two days, the atmosphere is pleasant, especially in the morning.” 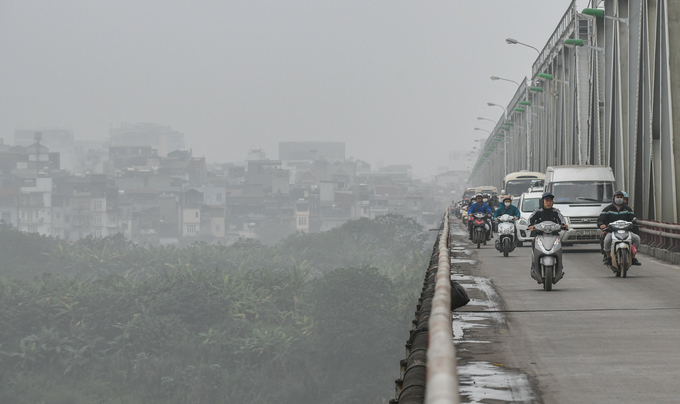 Chuong Duong Bridge: The 1.2 km long bridge was inaugurated in 1985 to reduce congestion on Long Bien Bridge which lasted for many years. Located parallel to Long Bien Bridge, Chuong Duong Bridge is the first large bridge designed and built by Vietnam without the help of foreign engineers. This is also the route connecting Hoan Kiem district of Hanoi directly to the provinces of Bac Ninh, Bac Giang and Lang Son along National Highway 1A. 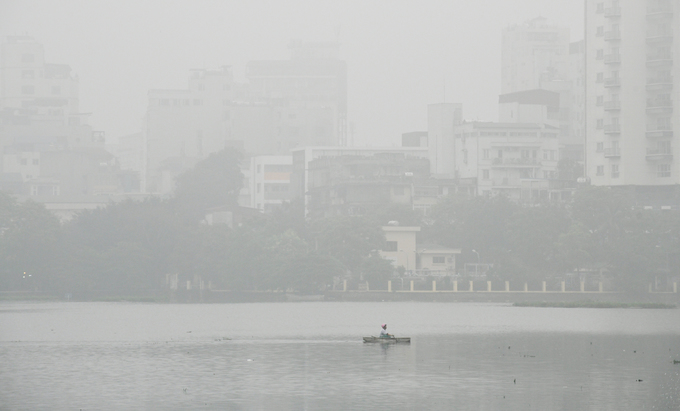 Truc Bach Lake: Separated from West Lake by Thanh Nien Street, Truc Bach Lake is often chosen by many people in the capital as a place to exercise and relax due to its green space. For tourists, Truc Bach Lake is attractive with duck riding, a cafe on the yacht and many food and drink stalls in the Ngu Xa area near the lake. Right next to Thanh Nien street, there is a row of ban flowers that bloom a lot in March, attracting many people to visit and take pictures.

West Lake: With a water surface area of ​​more than 500 hectares, West Lake is the largest natural lake in Hanoi. Water sports activities, especially sailing, are popular here. In addition, there is also a lakeside route that attracts visitors by its beautiful scenery, wide view and fresh air. This route also takes tourists through a series of famous works of Hanoi such as Tran Quoc Pagoda, Phu Tay Ho, flower valley, water park…

Newspaper is your news, entertainment, music fashion website. We provide you with the latest breaking news and videos straight from the entertainment industry.